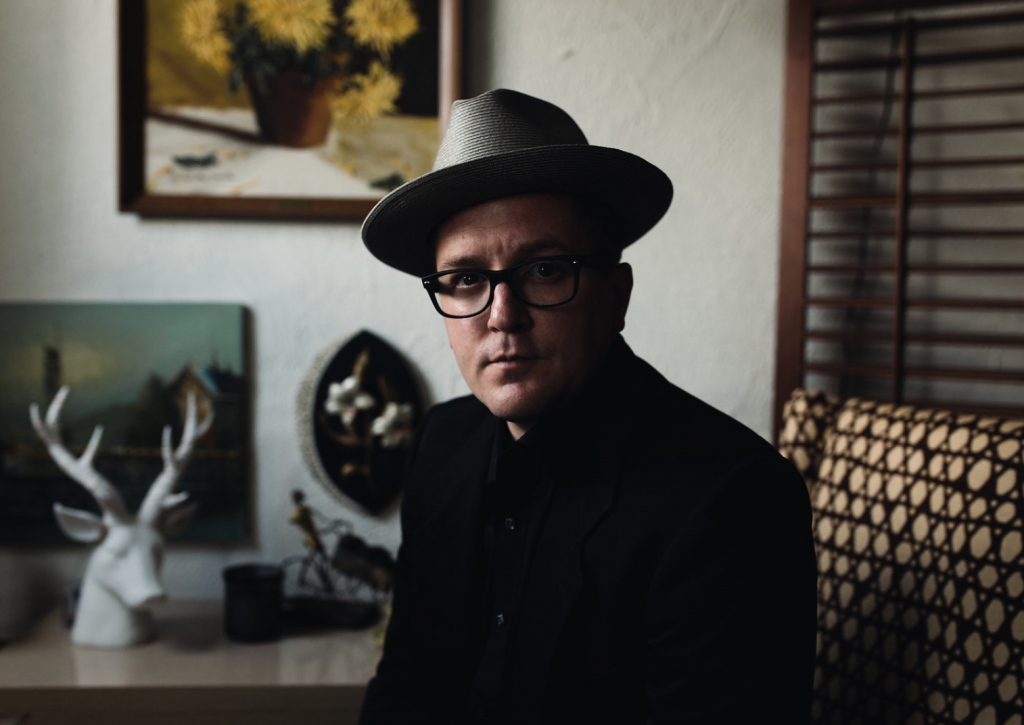 “Never give up on your creative ideas. Someday they may find the right place in time to work.”, says Mike Semrad. This is a fitting quote from Semrad, as he bleeds creative energy and has been at it for nearly 35 years. Starting at the age of 4yrs old in Norfolk, Nebraska, he now releases records, runs a record label called Sower Records, makes films and videos, and writes…both music and literature. Being a musician and artist, now living in Nebraska, he also owns a creative marketing company called Red Rebel Media.  For him, Nebraska, has been a fertile ground for growth and creativity. The strong sense of community that exists in Lincoln and surrounding towns has been the driving force to create.

In 2014, Semrad started a record label called Sower Records, in which they just released their 19th offering. The stable of musicians, along with other local artists, and area advocacy groups, including Bold Nebraska and Nebraskan native tribes, recently organized a concert to stop the Keystone XL pipeline, a nasty pipeline that was slated to ship crude oil from Canada through the US, only to risk the clean water that is vital for the common farmer’s irrigation. The concert that took place in Neligh, Nebraska in the middle of a cornfield, and was called ‘Harvest the Hope’. Willie Nelson and Neil Young were the featured performers, along with Mike’s band The Bottle Tops and other local artists. Their collective efforts, along with over 9,000 supporters helped to raise over $800,000 for the cause.

Semrad continues to organize groups of like-minded creatives to make positive change across the nation.  The newest release entitled ‘Cloud or Mountain’, named after a poem by Bil Johnson(Wahoo, Ne.), will be released in January of 2018. This will be the first full-length record by Mike Semrad outside of previous bands. (The Bottle Tops, Haywood Yards, The Semrad Brothers)

“I was born in Blair, Nebraska in 1976, the youngest child in a batch of boys, then two younger sisters followed. The house was always filled with music. My Father, Mike Semrad Sr, was a thorough “Rock ‘n’ roller”, having quite the career in music with a hit song in 1969 with his band The Smoke Ring, called ‘No Not Much’, that was recorded by the great Sam Phillips and his two boys Knox and Jerry Phillips. The first piece of music my Father gave me was a Dr. John(Mac Rebennack) record of piano songs. His noise completely devastated me with sound and I knew what I wanted to do.

On my Mother’s side of the family, My uncles were avid country musicians, always playing and touring around. In 1958, my uncle Dick Allison toured with the Grand Ole’ Opry and made tight with many country music legends, including Ray Price, Johnny Cash, and many more. The family used to host stars in Norfolk, Nebraska. Uncle Bob owned and operated the Granada Theater, that made home for hundreds of incredible stars throughout it’s gloried past. I remember meeting Boxcar Willie and asking him questions about his music. Those theater walls held incredible Nebraska history.

As a child I sang on the back of trailer beds, at state fairs, and in parades, I met Miss Nebraska and was nearly on the Johnny Carson show at the age of 5. I didn’t realize that pressing my finger between frets made a difference until I was about 12 years old, however. The guitar for me, early on, was simply a stage prop. It was something I held between costume changes, and held as much importance as my shiny Michael Jackson glove that was always in my pocket.

I began seriously playing guitar around the age of 14, and wrote my first song, based on the same chords that that I learned from Eric Clapton’s ‘Tears in Heaven’. I felt I could write anything with a C, F, Am, G. I think I wrote at least 10 songs with those chords. Until one day, I learned E minor. That changed the whole game.

I didn’t join my first legitimate band until I started college in Lincoln, Nebraska. I followed my older brothers lead and joined a band of psychedelic noise makers called ‘dajāj’, which was the literal arabic translation for the word “chicken”. We smoked way too much weed and recorded hours of what seemed like the same groove. But, it educated me on how to find that groove with a group, which was a priceless lesson I took away from that period. After one epic performance at a downtown Lincoln bar, it became clear that there was a different calling for my music. Soon thereafter, around 1996, a friend of a friend introduced me to a group of young hell raisers from Wahoo, Nebraska. Punks, as they called them. These were the kids adorned with leather jackets, patches of bands I knew nothing about, and rediculously stylish hair. They had heard that I played drums, pretty well, and that I might be looking for a gig. I was intrigued and took them up on their offer to audition for the punk rock outfit, one in which they somewhat jokingly called ‘Hootenanny’. Nearly every song sounded the same; straight ahead and full of rage and rock. It was like a billion volts of electricity was injected into my veins. That was the moment I fell in love with punk rock. They quickly educated me with mix tapes on some unbelievably inspirational bands like The Ramones, Dillinger Four(D4), The Bouncing Souls, and Hot Water Music, just to mention a few.  Our first show, was in a Dairy Queen in Wahoo, Nebraska. The rest was Nebraska punk rock history, as we went on to make a couple records under the name RocketFM and played with some incredible bands. During this time, I met my future wife and we both made and met some of the greatest friends of our lives.

After almost 5 years of playing drums, I knew it was time to either move somewhere else with the band or try to “make it” somewhere else. Unfortunately, or maybe fortunately, my band didn’t follow my lead to move to Chicago and I ended up moving to the windy city with my soon to be wife in search of a new life.

I continued writing songs and focusing on a new style of music. But, nevertheless had those punk element influences. Chicago was huge place. And, it hit me hard when I moved there. I luckily fell in line with a place called The Old Town School of Folk Music, and began working in the guitar shop selling guitars to artists and patrons alike. I sold one of my first guitars to Arlo Guthrie, and got to meet Neko Case and Joan Baez. That school of music changed my life and sent me on a path of songwriting that was new and as electrically thrilling as my first impression of punk rock.

I found 4-5 other players to fill in the parts, and started a band called Haywood Yards. We officially released only one album in 2006. But, left the band sitting on a fantastic double album that has yet to be released, officially, to this day. The style of Haywood Yards was editorally compared to the likes of The Waterboys, or the americana sounds of Calexico. I was just taking from all of my early country music inspirations and involving the love of punk rock.

When the full band wasn’t playing in clubs like The Double Door, or Martyrs, I started playing coffeehouses while also continuing to perform with Haywood Yards: this went on for a number of years. Unfortunately, nothing much ever came of Haywood Yards as we were set to tour on our double album on for it to crumble shortly before leaving. Again, unfortunate, but maybe fortunate.

In 2008, we had our first child only to be followed by our second a couple years later. Around 2011, along with our two children, we moved back to our homeland of Nebraska on to be welcomed home with open arms. After being instantly taken by the drastic difference in community and support, my wife along with my brother Andrew, we started a bluegrass honky tonk outfit called The Bottle Tops.

That Fall, in downtown Lincoln, Nebraska, alongside a pack of other soon to be label mates, we all decided to busk on the street. Gunter Voelker, of Jack Hotel and Max Morrissey of Bud Heavy and the High Lifes would meet downtown and trade songs, with a case open for tips. It wasn’t much about money as it was about sharing our songs, learning from one another and studying each others styles. Shortly thereafter, after realizing so much incredible music was happening in Lincoln, I started a record label called Sower Records.

Throughout this time, I was writing music outside of The Bottle Tops that didn’t quite fit that honky tonk, high energy sound. These songs were always held in the wings, and I always knew at a later time they might become something.

The recording of ‘Cloud or Mountain’ started in the summer of 2014. Story songs started to come to me and I began to rediscover my roots as a musician. I discovered more songs returning from their ashes, and even new ones taking me to places I had never discovered. The song writing feels like a muscle that is constantly growing. I can feel that it has strengthened over the years and I am excited to see what comes next.”.

The band of brothers play around the state under the name ‘The River Hawks’, as they fly from town to town rocking crowds of all sizes. Keep an eye out for The River Hawks in a city or town near you!

Ben “The Mailman” Mailand on drums

Brian McGovern on telecaster and mandolin

Jano Madsen on Keys and Saxophone